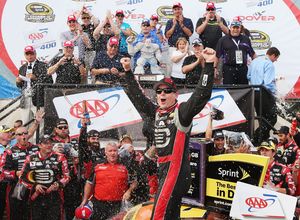 Sprint Cup races at Dover International Speedway often yield long green flag runs and dominant runs by leading cars on its one-mile concrete surface. Sunday's race offered just that, despite being the cutoff race for the end of the Challenger round for NASCAR's Chase for the Cup playoff system. Jeff Gordon continued to show his strength in his No. 24 Chevrolet, leading 94 laps and taking his fourth win of the season in the AAA 400. But Kevin Harvick (13th) and his No. 4 Chevy were dialed in the best Sunday, leading the first 147 laps from the pole and 223 total.

Late season uncertainty and calm in the Nationwide garage

There was a quiet in the Kentucky air, even as 40 stock cars in NASCAR's second-highest series prepared to fill the atmosphere with that guttural roar that they make about three-dozen weekends a year.

Race Capsule: Keselowski wins round one of Chase at Chicagoland

The NASCAR Sprint Cup Series Chase for the Cup playoffs began at Chicagoland Speedway the way the regular season ended - with Brad Keselowski in Victory Lane.

One of NASCAR's most exciting tracks, a short track no less, ended up producing one of the most uneventful races of the 2014 season. The Federated Auto Parts 400 at Richmond International Raceway Saturday night was supposed to be a knock down, drag 'em out showdown between the drivers on the Chase bubble - and not to mention the rest of the hungry field. Brad Keselowski looked to rebound from a disappointing wreck at Atlanta last week and started right by winning the pole.

A banner at the United Against Mouth and Throat Cancer tent, an organization that provides free screenings in the Atlanta Motor Speedway Fan Zone outside the Hampton, Georgia track, had a banner that read "Remembering Capt. Herb Emory." That was a theme for the entire NASCAR race weekend at AMS.