Race Capsule: Newman strategizes to victory at Phoenix, win slips away from Busch

Ryan Newman was not anybody's pre-race pick entering the Monster Energy NASCAR Cup Series Camping World 500 at Phoenix Raceway. In fact, Newman wasn't in the mix for the lead any of the race, until crew chief Luke Lambert's call not to pit on the final stop gave the No. 31 car the lead with six laps to go. Newman held back the thundering herd and scored his 18th-career win, his first win in 129 races, and RCR's first since 2013. 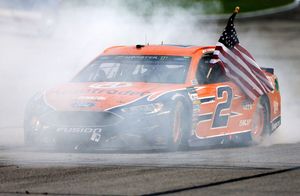 As we saw at Daytona last week, leading the last lap is the one that really counts. Brad Keselowski overcame unscheduled pit stops for a loose wheel and a flat tire to stay in contention, then take the lead after race dominator Kevin Harvick sped on pit road. His 22nd-career win is his first at Atlanta Motor Speedway and he almost won the Xfinity Series race the day before. Here is how the Folds of Honor QuikTrip 500, a hard-fought race on AMS' 20-year-old pavement, played for the Monster Energy NASCAR Cup Series.