Sunday's Sylvania 300 at New Hampshire Motor Speedway was a very mundane race - well at least most of it was. Carl Edwards (5th) won the pole and led the opening laps, then the race-dominator Kevin Harvick (21st) assumed the point on lap 20 and led 216 of the day's 300 laps. The action really did not thicken until different Chase drivers' days, including Harvick's, hit the skids.

The MyAFibRisk.com 400 at Chicagoland Speedway was largely a mundane event, as leaders quickly lapped most of the field and seemingly delivered big hits on several Chase drivers' title hopes.

2015 NASCAR Chase predictions for all 16 drivers 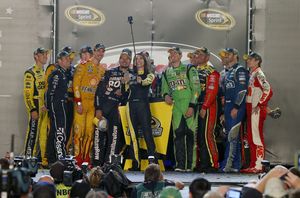 Sure, the Sprint Cup Series race at Richmond International Raceway lacked drama Saturday night - it often has in recent years. The drivers on the right side of the Chase cutoff entering the event are the ones that leave the .75-mile Virginia track in NASCAR's playoffs. The field, in its second year of the 16-driver, elimination format, has two first-timers, an amazing comeback story, a driver in the twilight of his career, one team in its last season, and one straight-up dominator all year-long. Now the only thing separating the 16 championship hopefuls are the three bonus points each regular season win brought them. And after 26 races, the final 10 events will file this big field by four, every three races, until the Championship Round at Homestead-Miami Speedway in November decides who takes the crown. Here are the prospects for each driver. You'll probably burn this after the first three races.

Race Capsule: Edwards catches the magic in closing laps of Southern 500 at "Carlington

The theme was a throwback one all weekend for the Bojangles Southern 500 at Darlington Raceway that was properly run the Sunday before Labor Day for the first time since 2003. The sport celebrated this once decades-long tradition with a parade of throwback race schemes, TV graphics, Hall of Famer appearances, and even Ken Squier and Ned Jarrett's return to the TV broadcast booth for a half hour. It was glorious.