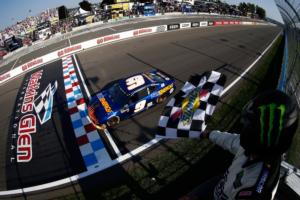 The wait is over. Chase Elliott has won his first-career Monster Energy NASCAR Cup Series race. He held off 2017 MENCS champion Martin Truex Jr. in a thrilling finish in the Go Bowling at the Glen at Watkins Glen Sunday. His win came in his 99th career start, just over halfway thru his third full-time season with powerhouse Hendrick Motorsports. That may not be exactly the fairytale Elliott imagined when he dreamt of becoming a Cup star like his father. But both William Clyde Elliott's, son and father, had to suffer some near-misses before their Victory Lane kisses.