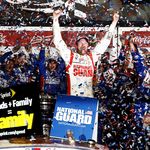 The two parts of the Daytona 500 were night and day - literally. The Great American Race started just after 1:30 p.m., only to have rain rear its ugly head on lap 38 just after 2 p.m., during a caution period for a blown engine by Martin Truex Jr. The ensuing bands of rain brought NASCAR's new Air Titan drying machine on and off the track multiple times over an agonizing 6 hour, 21 minute rain delay.

Five things learned from the Daytona racing, so far

Restrictor plate racing is highly unpredictable, but some patterns seemed apparent after Saturday's Sprint Unlimited and Sunday's Daytona 500 qualifying session. Denny Hamlin started his season the right way with his Unlimited win and Austin Dillon helped write an early chapter in the storybook on the return of the No. 3 Richard Childress Racing Chevy. His 196.019 mph speed was just a tick faster than Martin Truex Jr.'s outside pole run. Both drivers are the only ones who know their starting spot for the season-opening race. That is about the only known for now in Daytona, but here are some things we learned this weekend.

New Chase not a reason to stop watching NASCAR

News of NASCAR's 16-driver, wins matter most, points-resetting, highest finisher of remaining four at Homestead-Chase surfaced just over two weeks ago. 80-90% of the opinions I heard of the format both before and after NASCAR's official announcement of it last week have been of the dissenting variety.