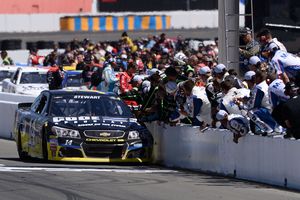 Tony Stewart's final seasons have been trainwrecks. Bad performances, mistakes, and almost zero results have only been interrupted by two catastrophic injuries away from the No. 14 car and the tragic death of Kevin Ward Jr. at the hands of Stewart's Sprint Car. But Stewart's win in Sunday's Toyota/Save Mart 350 NASCAR Sprint Cup Series race at Sonoma Raceway in California could prove to be not just the 49th win of his career, but one of the biggest. Here is how Stewart broke a three-year, 84-race winless streak. 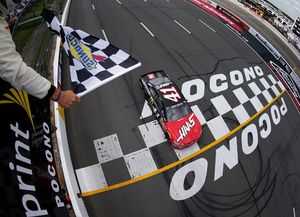 When you're knocking on the door every week, it's bound to open sometimes. Kurt Busch has been the most consistent driver over the course of but just hasn't been out in front of the field very much. That is until Monday's Axalta "We Paint Winners" 400 at Pocono Raceway, a 160-lap affair delayed a day by heavy rain. If Axalta lived up to its promise, and the No. 41 Monster Energy team got some serious body paint in Victory Lane.