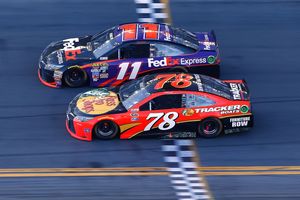 This 58th Daytona 500 will go down as a perfect mix of wild and tame, heartbreak and triumph. No. 11 Denny Hamlin wins in a spectacular finish - the closest in 500 history - on his 11th try in the Great American Race. Hamlin led the most laps on the day (95), but the final green flag pit stops around lap 156 shuffled Hamlin's Toyota from 1st to 7th, when Hamlin slid his tires in his box and the crew decided to change four tires, instead of two.

What to watch for in Daytona

This is almost the cliche "season is here" declaration - almost only because how big can a declaration be when so many have made it? But certainly the air is abuzz with anticipation as NASCAR kicks off its grueling schedule in its top three series here at Daytona International Speedway. Most people's "new year promise" wears off by mid-January, but for the few dozen NASCAR teams that same luster shines in the mid-February Florida sunshine.