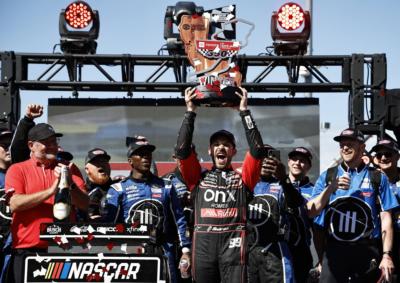 You’ll hear true journalists say all the time that they don’t go to an event rooting for any particular teams; they go rooting for a good story.

Over the closing laps at Sonoma, those streams pretty much crossed.  The good story became a rooting interest.

More often than not, you’ll see Daniel Suarez wearing a smile, despite the hardships he’s endured not only to make it to the Cup Series, but to stay in the Cup Series.  He has a personality that will win fans as he gets more exposure.  And, more exposure comes with wins.

This win was not a fluke.  Suarez has had a good car all year and has run up front plenty.  It was good to see all his hard work finally pay off with a trip to Victory Lane.

I can’t think of a better way to go into the only off-weekend of the year.  A win that has jut about everyone feeling good.