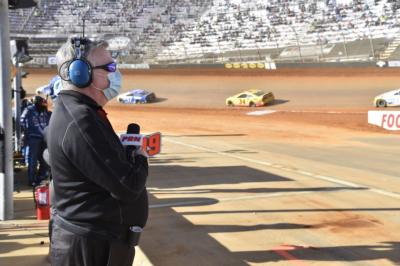 For more than 55 years, the NMPA has honored writers, broadcasters and photojournalists from news outlets covering motorsports. Each year they gather to recognize the best in a wide range of categories. With the pandemic sidelining last year’s event, the 2022 NMPA awards accepted entries for consideration from both 2020 and 2021.

“It was an honor to accept these awards on behalf of myself and the amazing crew at PRN” Rice said. “Everyone works so hard throughout the season to bring these exciting races to the fans and it means a great deal to have that hard work recognized by the NMPA. I’d also like to extend a big congratulations to our good friend and colleague Mark Jaynes on taking first place.”

Receiving top honors in the Live Event Radio Broadcast category was part-time PRN turn announcer and full-time IndyCar Radio anchor Mark Jaynes. Jaynes and his colleagues at IndyCar Radio were recognized for their thrilling call of 105th running of the Indianapolis 500.

For Topic-Oriented Feature Radio, PRN’s Kent Bernhardt won first place with Jimmie’s Last Roundup, a look at the seven-time champion’s last season in NASCAR. Bernhardt also took home third place for The Day the Racing Stopped and fourth place for And We Were There, features highlighting the pandemic's effect on the racing industry.

PRN will kick off its 2022 season of racing during Pennzoil 400 weekend at Las Vegas Motor Speedway, March 5-6. See our full broadcast schedule and find a station near you at GoPRN.com.

To learn more about the NMPA visit nmpaonline.com.