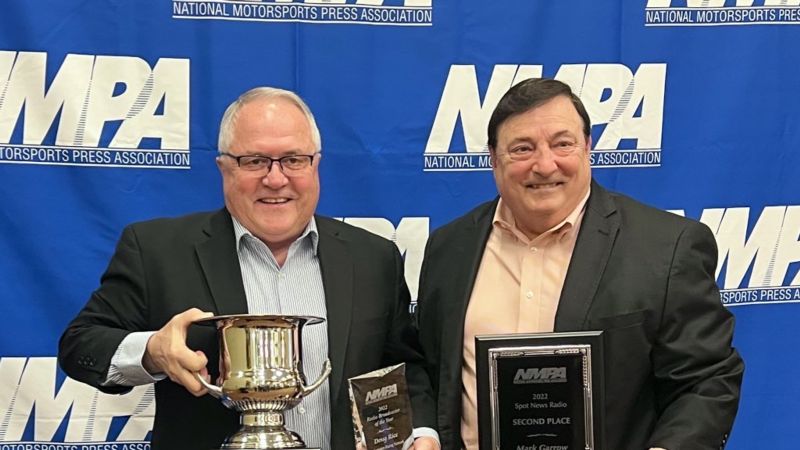 For more than 56 years, the NMPA has honored writers, broadcasters and photojournalists from news outlets covering motorsports. Each year they gather to recognize the best in a wide range of categories including Spot News Radio, Event Oriented Feature Radio, Topic Oriented Feature Radio and Live Event Broadcast Radio.

PRN president Doug Rice received multiple awards including Broadcaster of the Year and the prestigious Joe Littlejohn Award for service to the NMPA.

“When I was elected president of the NMPA, one of the first things I began to think about was the Joe Littlejohn Award, and it was a quick and easy decision of who would be the recipient,” said Kelly Crandall, NMPA president. “Doug has been an incredible asset to the NMPA, whether serving on the board of directors and being actively involved as a member or helping during the convention events.

“Doug has also been one of my biggest supporters in this role, which has meant a lot. He’s offered advice and ideas to the NMPA, and there was no doubt that he deserves this long overdue honor.”

In addition, multiple awards were presented to Mark Garrow, host of PRN’s four-minute daily news show Garage Pass and Kent Bernhardt, PRN’s director of production who was also awarded Producer of the Year.

“Winning these NMPA awards is a reflection of the dedication of the entire PRN team and I couldn’t be prouder,” said Doug Rice. “Kent Bernhardt is one of the most talented individuals I’ve had the pleasure to work with in my career and seeing him recognized as Producer of the Year is true validation of his hard work.”

A New Atlanta – What Will We See | (Third Place) Kent Bernhardt

Producer of the Year

Broadcaster of the Year

PRN will kick off its 2023 season of racing during Pennzoil 400 weekend at Las Vegas Motor Speedway, March 4-5. See our full broadcast schedule and find a station near you at GoPRN.com.

To learn more about the NMPA visit nmpaonline.com.